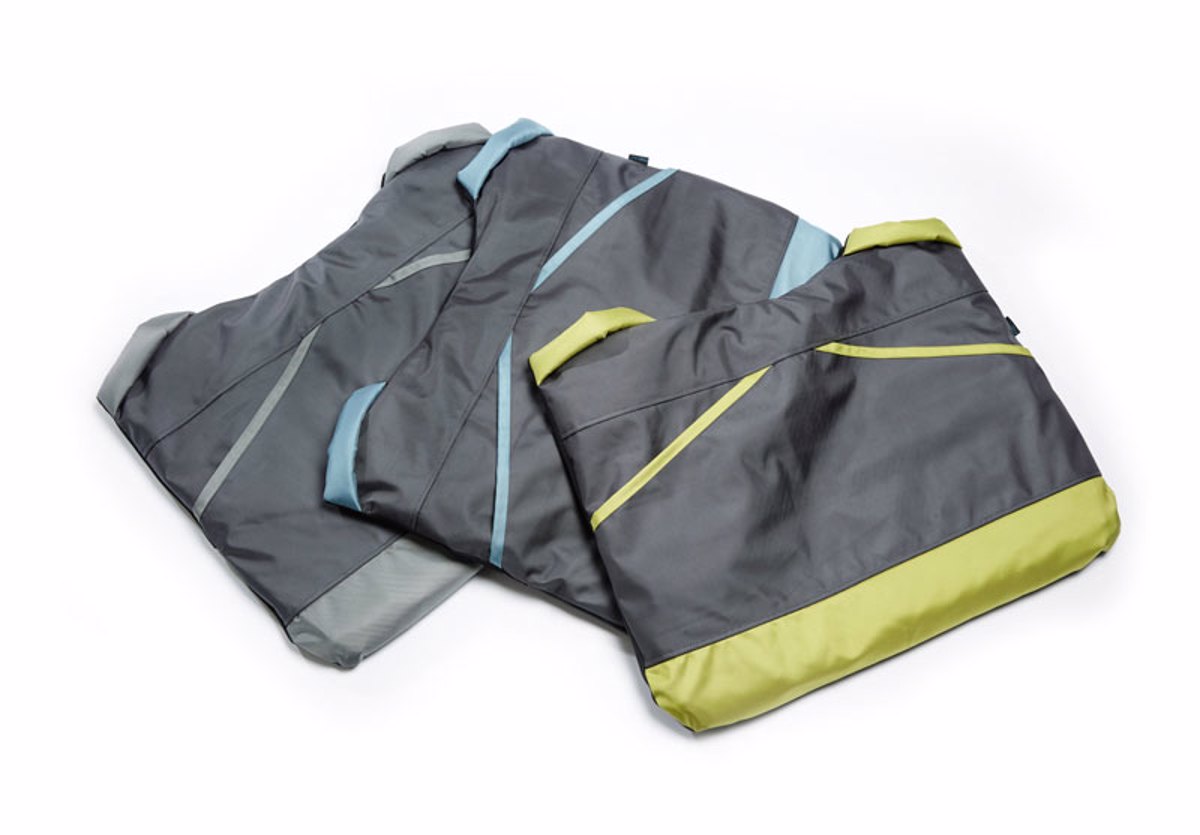 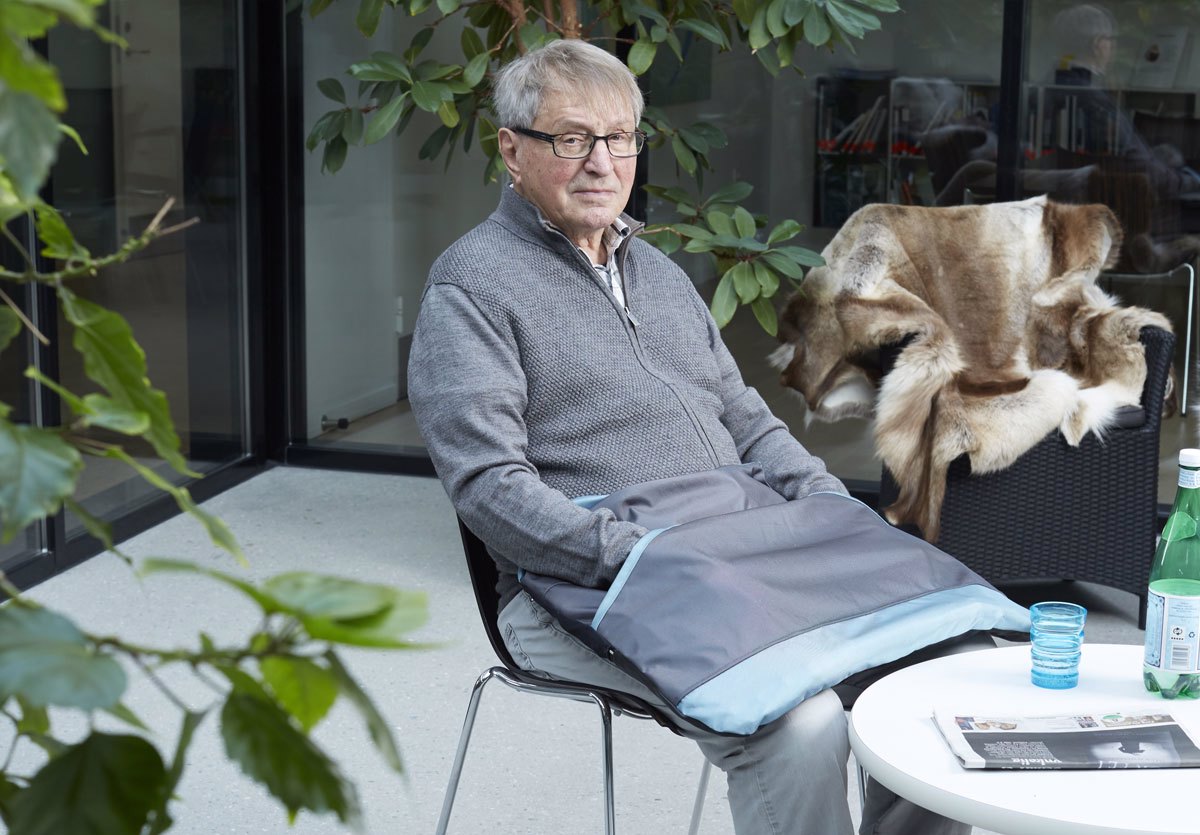 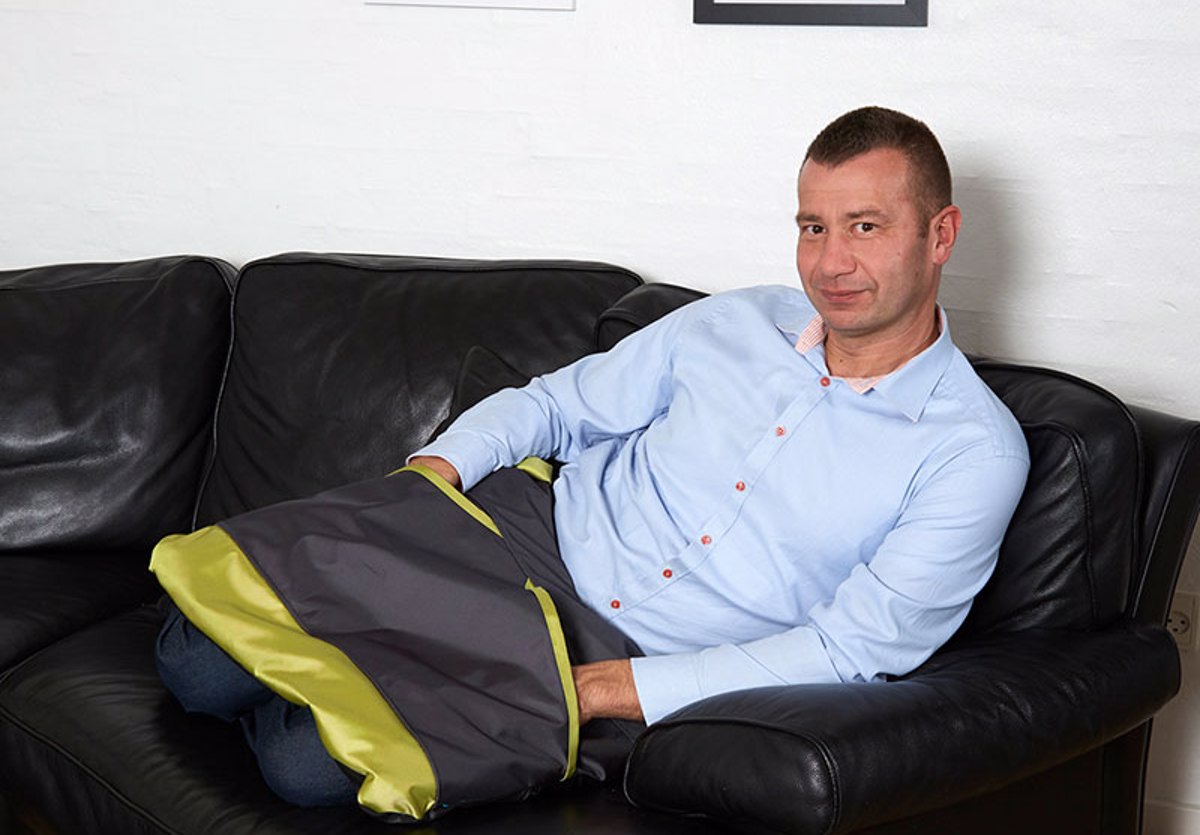 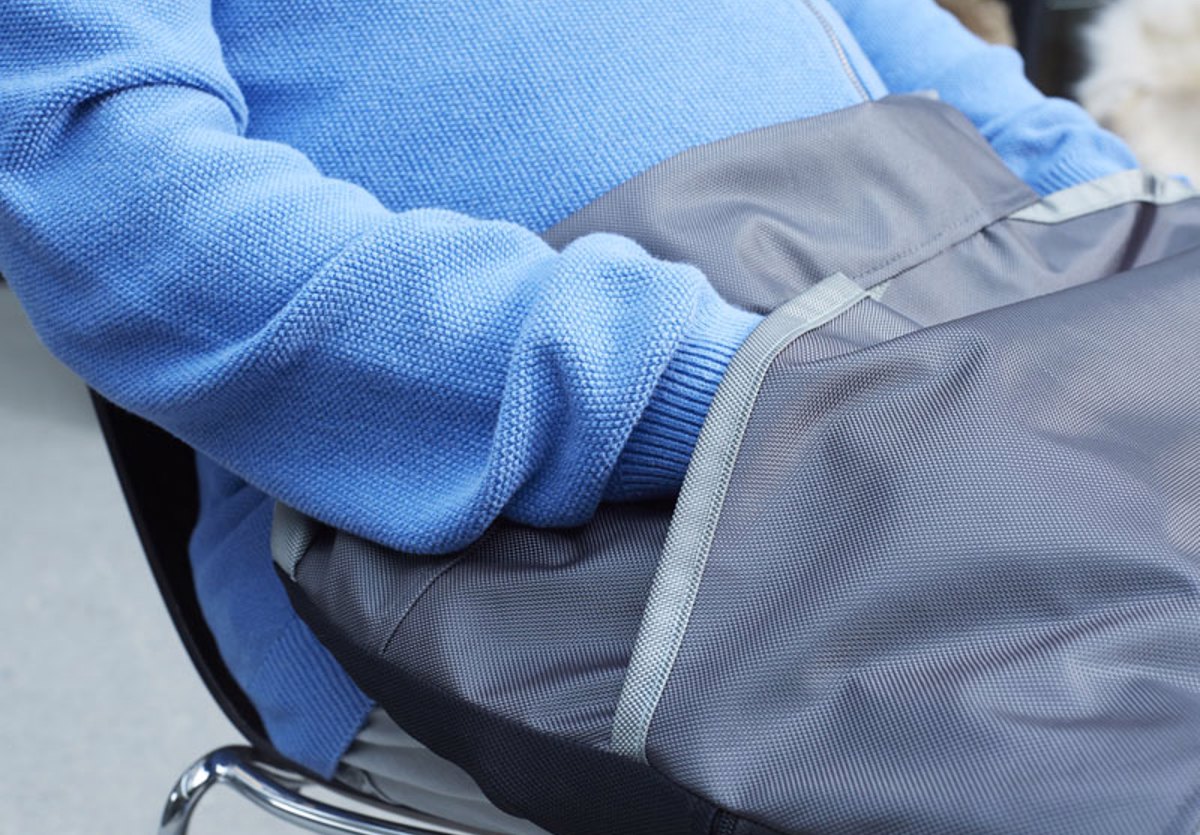 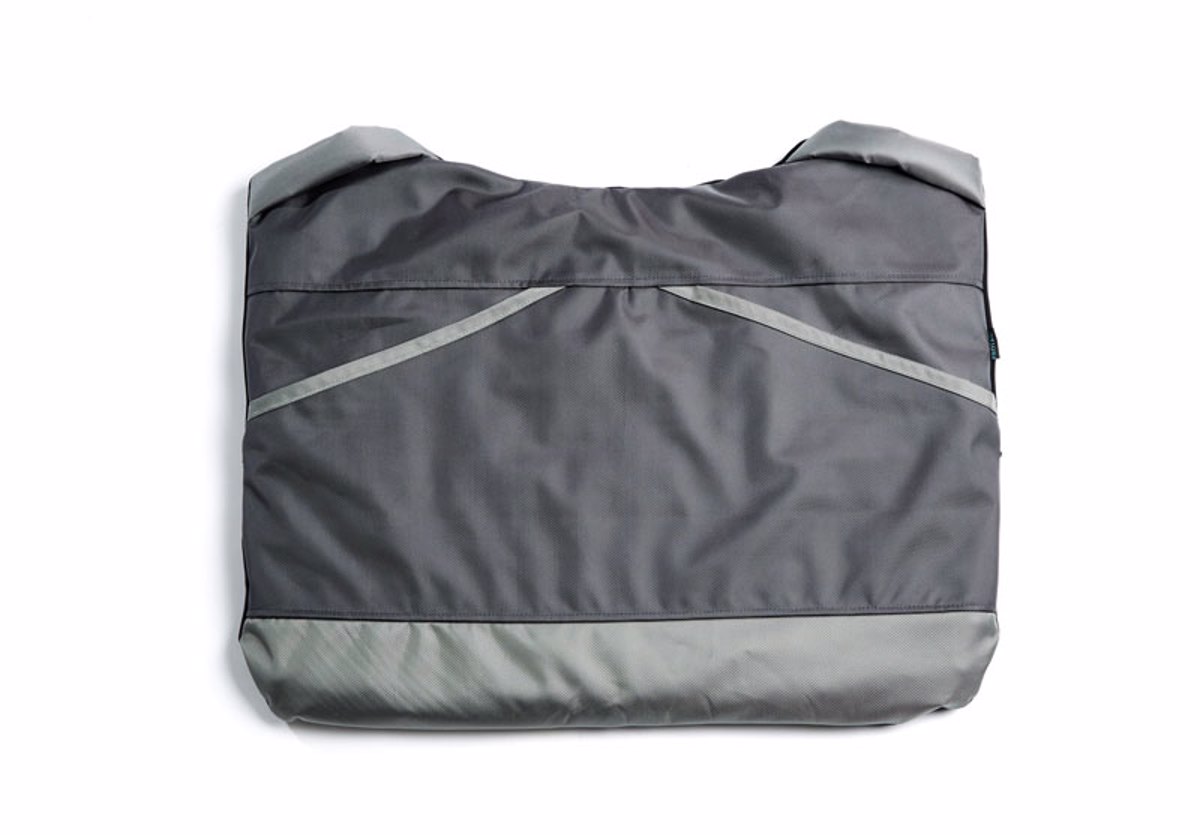 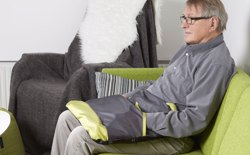 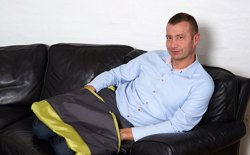 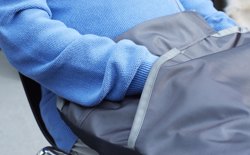 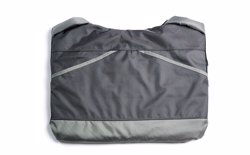 Sensory-stimulating knee blanket
Protac KneedMe® is a sensory-stimulating knee blanket that rests on the lap, covering the knees and thighs. The balls in the knee blanket stimulate the sense of touch and the muscle-joint sense through deep and dynamic touch-pressure, thus promoting improved body awareness. For those with restless hands, they can keep their hand active or tucked away in the outer pocket. The knee blanket can be used during seated activities, rest and meals in both wheelchairs and ordinary chairs.
Protac KneedMe® alleviates physical unrest, learning difficulties and sharpens concentration. The knee blanket is suitable for both young people and adults, and benefits people with dementia, brain damage, physical unrest, Parkinson’s, and Restless Legs Syndrome.

See more about the effect of the knee blanket here

Recommended by professionals
Specialized therapists use Protac KneedMe® as an aid during therapy. The knee blanket is beneficial to cooperation and attention during cognitive training, ADL training, patient care or in connection with therapy using The Affolter, Bobath and Coombes concept.

Design and size
Protac KneedMe® is sewn in an easy to clean material with a non-slip coating on the back. The pocket has an inner clip where hand fidgets can be attached. The knee blanket is available in 3.2 kg and 4 kg in different colors.

Can be combined with
Protac KneedMe® can be advantageously combined with Protac GroundMe® and Protac Cushion™ if further stimulation of the sense of touch and muscle-joint sense is needed.

The boy has a great degree of physical unrest and runs around a lot. He has difficulty sitting quietly and listening or doing activities. Sensory-wise, he has tactile defensiveness, sensory seeking behavior and poor body awareness. He is generally fond of deep touch-pressure, and techniques such as brushing. He also wears a Protac MyFit® ball-vest  a few times during the school day. He even requests the Protac KneedMe® knee blanket  when the class has assembly. He sits down on a stool with the blanket over his lap and participates in a discussion about "what’s happening today’" - more focused than usual. With the knee-blanket , he can sit for 20-30 minutes on the couch, alone with a book or with another student. He never did that before he got the knee-blanket.

The woman has severe physical, mental, and cognitive impairment as well as depression. The woman is very bothered by physical and mental unrest. She has found it increasingly difficult to accommodate multiple sensory stimuli and is easily overstimulated. Overstimulation manifests itself in violent physical movements and using a loud, angry voice. The woman spends a lot of time in her own living room because she needs help in limiting sensory input. The woman has difficulty accepting handling and being turned over while in bed in connection with personal care. She therefore receives Protac KneedMe® knee blanket immediately after morning care. She is offered a choice between staying in bed and having the knee blanket draped over her or sitting in an armchair with it in her lap. When using the knee blanket, she becomes and calm and seems more secure. Now she is offered the knee blanket if she is restless during the early morning hours and morning care is postponed until she is calm and more comfortable. The woman now uses the knee blanket daily, and is seen much more frequently smiling, relaxed and comfortable. When you enter the living room, she often turns her head and greets you with smiles or calm sounds and engages in “small talk." The meals go better than before when she has the knee blanket on.

Female wheelchair user who is needs full assistance for all daily chores. Has Parkinson-like movement disorders, fluctuating attention and may hallucinate. When she has mental unrest, she produces a loud, persistent, and monotonous sound. The woman has been using Protac KneedMe® for several months with the goal of enabling togetherness and participation in music activities. Already the first time she used KneedMe®, it was clear that the knee blanket had a good effect. She became more present in her contact to others, concentrated on the music and the monotonous sounds were replaced by occasional humming along with the songs.

The woman tends to have verbal self-stimulatory behaviors – with a great degree of perseveration of sounds. She is almost insistently singing and loud in conversation with herself. The woman is given Protac KneedMe® immediately after morning care to prevent escalation of sounds / self-stimulatory behavior. Already at the first trial, it is evident that the knee blanket provides the woman a feeling of calmness; her voice is lower, and she responds more appropriately when she spoken to by others. After using the knee blanket, her facial expression is gentler than usual. The woman now sits with the knee blanket every day and preferably several times during the day.

The Protac KneedMe® knee blanket has provided him with the calmness he needs to be able to sit at the table during meals both at school and at home. In the past, he had to get up when he became restless and often did not finish eating. In general, he is in a better mood now and has more energy to when relating to his classmates. He can better manage choosing between activities as well as the choices that the staff gives him when he becomes anxious and restless.

40-year-old man, brain damaged due to a traffic accident

The man uses the Protac KneedMe® knee blanket during transport in a wheelchair, as he would otherwise tense severely in his lower extremities (legs). In the past, the tension has been so violent that he has had spasms in his lower extremities (legs). When using the knee blanket, he can sense his body while being transported in the wheelchair, resulting in less anxiety and less tense muscles. The man has also started using the Protac Ball Blanket® at night and during his mid-day rest. This results in him being easier to mobilize, dress and subsequently transfer.

The boy is upset about going to school and he can’t manage to do individual tasks assigned to him. He does not thrive at home because his "battery" is completely flat when he comes home from school. A Sensory Profile evaluation of the student has been completed, which shows that he has tactile defensiveness to a moderate degree, and he has a low threshold for sensory input from his own body and the surroundings. When he is stressed at home, he often sits under his blanket to shield himself from light and sound. He seeks out the bedroom where there is no noise. At home, he is good at finding self-regulatory strategies, but it is difficult for him in school. He has a Protac KneedMe®, which he uses every morning when he comes to school. It helps him to become calmer. He is comfortable with the knee blanket and it helps him to be able to focus on the planned school activities. There is a need for close cooperation between home and school in order to be able to adapt the activities so that he is not overwhelmed. We experience that the knee blanket in combination with suitable strategies help the student to calm down.

Protac KneedMe® blankets can be washed. The regularity and need for washing depends on use. See below for washing and cleaning instructions.

Protac KneedMe®
Can be machine washed in a min. 6 kg capacity washing machine. Use washing powder with no bleaching agents - see also the washing instructions on the cover.

· The cover and ball bag must be washed separately. The laundry bag supplied is recommended for washing the ball bag.

· The laundry bag supplied is recommended for washing.

To remove spots using a spot remover, always try first on an area which is not visible to test for damage or discolouring. Protac does not recommend the use of spot remover.

Protac cannot be held liable for incorrect washing and maintenance.

We recommend airing the blanket regularly.
Check the Protac KneedMe® every time it is used for defects and deficiencies, and inspect the seams, zip, fabric, balls and general condition once a year. If any serious defects are found, withdraw the blanket from use until repairs have been made and it is safe to use again.

Protac designs, develops and manufactures a variety of unique sensory integration products that alleviate motor and mental unrest and help all age groups with sensory impairments.